Click here to catch up on AbD Day 1: Dobrý Den and AbD Day 2: Rhapsody in Bohemia.

Day 3 started with a bit of travel magic. This was our last morning in Prague, so we packed our suitcases the night before. We placed our luggage outside of our hotel room and it was taken to the bus for us so we didn’t have to deal with it. Not having to fight with luggage through the cobblestone streets was such a huge plus for me! We were able to eat breakfast without having to worry about all of our stuff sitting there, vulnerable, because it had already been loaded.

On the bus, we were given an overview of the day’s activities, starting with a 2 hour drive to Český Krumlov. The Adventure Guides had a few activities to keep us occupied during the ride. We were given a Czech tongue twister to try out – uh, can I buy a vowel!? The bus was also equipped with wifi, which was really nice to be able to stay in touch with friends and family back home without having to use international data. There was a daily use limit so uploading pictures was not feasible from the bus, but it was really nice to have internet access for basic online needs.

About an hour into the drive, we stopped for a bathroom break. This is when we were introduced to the wonderful snack box. In addition to cold bottled water, we had our choice of sweet and savory options. There was a nice mix familiar (Lay’s and Oreo’s) and local (musli and paprika-flavored chips) snacks. This box was available throughout our journey and was replenished frequently.

Our Guide, Winston, introduced us to Krtek the mole. In Central Europe, kids grow up with Krtek like kids in the US grow up with Mickey Mouse. We watched a few cartoon shorts with this little guy, which helped pass the time during the second leg of our journey.

Český Krumlov (sounds like chess-key crumb-loff) Castle is the second largest castle in the Czech Republic (after Prague Castle) and is surrounded by a little town. It’s a quiet village, designated as UNESCO World Heritage Site. The Vltava River runs through the city, creating picturesque views of quaint waterfront houses and businesses. The cobblestone roads and red rooftops look as if they were frozen in history. I can’t imagine a more perfect storybook town to visit.

We were given a tour around the town by a local historian who told us about the lore surrounding the city. It’s legend that the first stories of vampires arose from Český Krumlov. Princess Eleonor Amalie von Schwarzenberg, known as the Vampire Princess, practiced several unusual rituals that led the town to believe she was not entirely human. For example, she drank wolf’s milk in an effort to produce a male heir to the throne. She did eventually have a son at the age of 41, which was unheard of at that time (early 1700s). As her health deteriorated, she turned to blood-letting for purification from demons. When that did not cure her, she searched for ever stranger means of ridding her body of evil. When she died, an autopsy was performed, another peculiarity for the time. While the autopsy did not list cause of death, there was enough detail for modern medical professionals to later determine that she likely died from cancer.

We also heard the tale of the White Lady – a Český Krumlov native who was wed to an out-of-town Lord against her will. She was treated horribly by her husband, but there were no legal actions available for women at that time. After her husband’s death she returned to her family home. She died as a beloved member of the community and is said to still wander the city she loved to welcome visitors and locals alike. 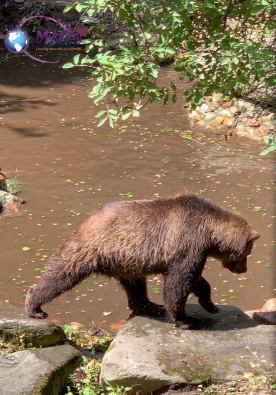 Much like Prague Castle, Český Krumlov Castle was historically home to brown bears. Beginning in the 16th century, bears were kept in the moat to help protect the castle. Bears were even integrated into the coat of arms of the Rosenberg family, who long ruled over the town. There are currently three bears living in the enclosure, which was recently renovated to meet current recommendations for enrichment, including a pool for swimming and toys to play with. When we were visiting, two of the bears were chasing each other around the enclosure, wrestling and swimming after each other. We also learned every year, there is a Bear Festival for Christmas where the townspeople bring treats (approved by their caretaker) for the bears to have a tasty holiday. 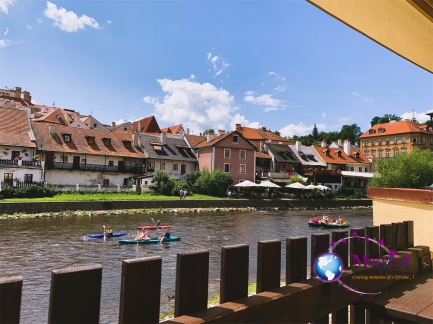 Based on the recommendations of our Guides, we had lunch at Papa’s Living Restaurant. As we were getting seated, we noticed another group of Adventurers and invited them to join us. The food was good, mostly Italian cuisine. I had a very cheesy lasagna that was pretty darn tasty. But the real draw of this restaurant was the view. We had seating right next to the Vltava River, where we watched as people kayaked and canoed by us… or got stuck in one case. We talked and got to know some of our fellow travelers in this serene, fairy tale setting.

We had some time to kill before meeting back up with everyone, so we browsed some of the many shops. Moldavite is one of Český Krumlov’s best known souvenirs. This dark green gem was created during a meteorite impact in this region hundreds of years ago and can be found in a variety of jewelry. There are wood-working shops, candy stores, and a variety of other souvenir opportunities. I didn’t have much room in my luggage to begin with, so I opted for this small light-weight companion – a keychain of Krtek the Mole! By that time, we were ready to meet back up and make the drive to Salzburg.

The Bus is Alive with the Sound of Music

The drive from Český Krumlov to Salzburg is approximately 2.5 hours. I had to look that up because I was so occupied during the ride that I had no idea. Like the trip to Český Krumlov, we made a bathroom stop about an hour into our drive. We were also introduced to Brumík bears, which were described as similar to Nutella-filled Twinkies. According to Winston, people either love these or hate them. My roommate loved it, while I did not. Either way, they are super cute and a fun treat to say goodbye to the Czech Republic.

The majority of the time on the bus was spent watching The Sound of Music. Salzburg is best known to Americans as the filming location for the movie and part of our time in the city was going to be dedicated to touring some of these locations. Throughout the movie, our Adventure Guide Paola pointed out places we would be seeing during our tour so we knew to watch for them. Our group ranged from full-blown Sound of Music fanatics to casual fans (me) to those that had never seen the movie. Watching the movie and having certain scenes pointed out made the next day’s tour much more memorable – but more on that later. The coolest part was that, due to hitting some traffic, we were watching the wedding at the exact moment that we were passing the church where the scene was filmed. We ended our bus ride with a new pin to add to our collection – Czech It Out!

We arrived at the Salzburg Sheraton Grand in the early evening. Our Adventure Guides distributed the room keys and reminded us that dinner would be in the hotel that evening. We walked into our room to see a nice bathroom, a beautiful view of the Austrian Alps, and a KING bed.

Given that my roommate and I had just met in person for the first time 3 days prior, sharing a bed wasn’t ideal. We contacted our Adventure Guides who took immediate action. We went to dinner with the other Adventurers (food was fine, but wasn’t anything worth highlighting in an already too long post) while they worked to resolve the issue. We walked out of the restaurant and were handed our new room keys – all of our luggage had already been moved to the new room for us! While you never want something to go wrong while you’re traveling, it was really nice how they handled everything so we didn’t have to.

After dinner, my roommate and I explored our new room in more detail. The bathroom was pretty epic! The toilet had its own closet, with a phone. The shower had a rainfall shower head, an emergency pull cord, and a (completely transparent) door. 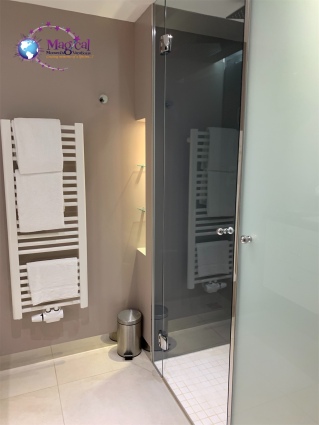 There were towel and floor warmers to keep you toasty after bathing. There were lots of outlets, including some with US style plugs! There was even a scale, in case you want to weigh yourself on vacation… do not recommend. 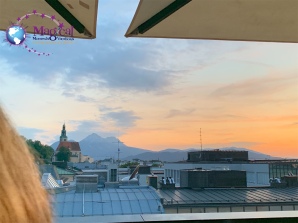 Anyway, to finish off our night, we met up with some of our fellow Adventurers and walked to a nearby sky bar. The view wasn’t as cool as the one in Prague, but open-air rooftop bars are my new favorite. We got to watch the sunset and enjoy the fresh air while sipping international beverages and getting to know our new friends. We were all pretty tired from several long days of touring and the time change so we said our goodbyes and went to bed.