Catch up on Day 1 by clicking HERE.

Day 2 of our Adventure was the first full day of activities in Prague. Despite the 6 hour time difference, I woke up bright-eyed and bushy-tailed for our 7:30am meeting time. One benefit of all the flight issues I had on Day 1 was that I had been awake for over 24 hours and was able to sleep easily once I finally went to bed in Prague. We even woke up early enough to grab breakfast at the hotel buffet (included with the AbD).

“Dobry’ den (hello), adventurers,” said Winston, one of our Adventures by Disney guide. Our first activity of the day was the Prague Walking Tour. We were each given a whisper pack headset so we could hear more easily hear our local Prague-specific expert, Robert. A private coach took us to the entrance of the Prague Castle to begin our tour. As we rode into the heart of Prague, we learned a bit about the history of the city. Did you know… the word bohemian comes from a slur against the Boii people from the Kingdom of Boheim/Bohemia, meaning lazy or not driven? The Kingdom of Bohemia is one of the kingdoms that eventually became part of the city of Prague.

Once we arrived in the city, Robert told us that pedestrians have the right-of-way, over cars, but trams have the right-of-way over everything in Prague. He warned us that the trams will not stop for you, noting that drivers get 3 days leave to recover if they do hit someone. I thought he was exaggerating to make a point, but we heard the same thing from other people so… Watch out for trams!

Our tour was so full of information about the city and its history. I’ll share a few highlights here, but the experience is so much better learning about what’s right in front of you.

Prague Castle is one of many UNESCO World Heritage sites in Prague. It is one of the oldest medieval castles (built in the late 800s AD) and is also the largest cohesive castle complex in the world, at almost 210,000 sqft. The Castle guards used to keep bears as pets and many Czech castles still have bears in and around their motes. Though no longer hosting a monarchy, the Prague Castle is still home to the country’s President. If the flag is raised (like in right of this picture) it means the President is home in Czechia.

The St. Vitus Cathedral can be found within the Prague Castle grounds. Originally started in 1344, construction wasn’t completed until almost 600 years later in 1929! The architecture and sculptures were amazing. To see more of my photos, visit my Facebook album.

The Golden Lane is also located within the grounds of Prague Castle. These tiny houses have been around for centuries, initially playing home to working residents of the castle, like guards and seamstresses. The lane is named for the goldsmiths and alchemists that used to live here. Even Franz Kafka lived in one of the houses in the early 1900s! Today, the Golden Lane is preserved to provide a glimpse into the history of Prague and what is was like to live within a castle complex.

We wound our way through Prague’s Old Town, which used to be home to the aristocracy who wished to be close to the King and the Castle. Walking through the cobblestoned streets, it’s easy to get swept up in the old world charm of Prague.

We arrived at the foot of the Charles Bridge right as the skies opened and dumped a massive amount of rain and hail. We ran for shelter under the bridge to wait for the worst of the storm to pass. With the panic of getting away from the rain, no one noticed our guides went missing until they returned – with snacks!

Meet the trdelník – a cylindrical, bread-like pastry with a light cinnamon flavor that you can enjoy filled or unfilled. These treats have an interesting history in Prague. According to Robert (Prague guide), they only recently became popular after a tourism site mistakenly listed them as a must-try item in Prague. Similar pastries can be found throughout Central Europe, but over the past decade they’ve become popular in Prague due to tourist expecting to find them and locals meeting that demand. By the time we finished our treats, the rain had let up and we continued on our journey to see the top of the Charles Bridge, rather than its underside/rain shelter.

The Vltava River runs through the city, splitting it in two sections. For centuries, the Charles Bridge was the only way to travel between the two parts of the city. The bridge was commissioned by and named for King Charles IV, Czech king and Holy Roman Emperor. It is said that King Charles loved numerology, specifically 1-3-5-7-9-7-5-3-1 which makes a bridge pattern. Rumor has it that King Charles required construction on the bridge begin precisely at year: 1357, day: 9, month: 7, time: 5:31am.

Charles Bridge is adorned with statues of saints and prominent Czech figures. The most popular of these is Saint John Nepomuk, who is memorialized for being drowned after being thrown over the Charles Bridge after refusing to divulge the Queen’s confessions to a jealous King Winceslas IV. He is now the patron saint of the sacred confession and is honored throughout Prague. At the foot of his statue is a bronze relief depicting his death. Legend says if you rub Saint John’s image, you are destined for good luck and a return to Prague. Some people rub the Queen or the dog (like I did), but those are not part of the original tradition. 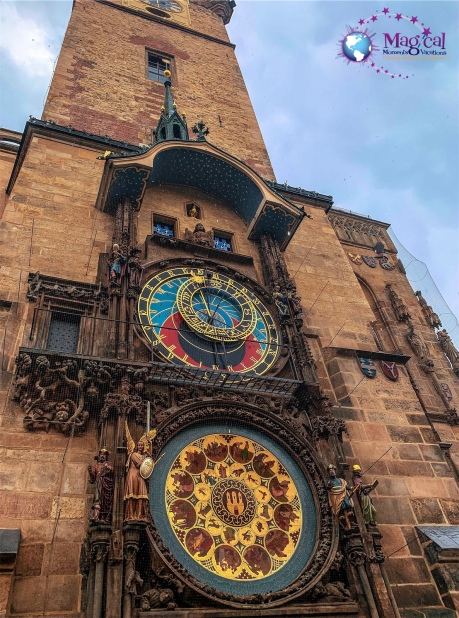 Our walking tour concluded in Old Town Square, home of Prague’s Astronomical Clock. This clock is the oldest functioning astronomical clock in the world, originally built in 1410. The clock’s dials indicate the movement of the sun and moon in the astrological signs and the annual calendar. Additionally, there is a small show preformed by statuettes each hour. I wish we had had more time to enjoy the clock, but the rain had started again so we were rushing to find shelter.

Our Adventure guides gave us a few suggestions for lunch that were within a couple blocks of Old Town Square. We split up, based on what kind of cuisine we wanted, and journeyed to find food. I went with the Pizza Nuova crowd because we were going to be having Czech food for dinner. The pizza was good, but nothing to write home (or blog) about. We did have an interesting time with the conversion rate for currency though. When the menu says a basic cheese pizza is 230 CZK, you question things. The Czech Republic uses the Czech crown as currency and the conversion is about 20:1, meaning the pizza was only about $11, but I had a major sticker shock at first. After lunch, we walked around for a bit and enjoyed the city before heading back to our hotel to rest before dinner.

We met back up with our Adventure guides, Robert (our Prague walking tour guide), and a new guide Neil. We split up into two groups for the first part of our evening. My group started at the Gourmet Passage. 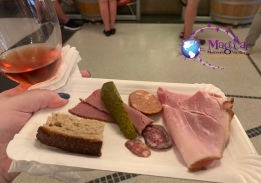 The Gourmet Passage is Prague’s foodie paradise. The passage is similar to a food court, with several storefronts and cafes appealing to different appetites. When I read we would be doing a progressive dinner, I pictured going from store to store to try different items. 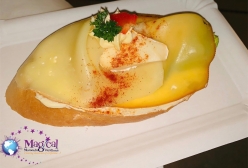 Instead, we were seated and items were brought to us. We got the chance to try Czech wines, cured meats from a generations-old butcher shop, and a few types of obložené chlebíčky (“garnished breads,” open faced sandwiches).

After appetizers in the Gourmet Passage, our guide led us to a rooftop bar. We were there long enough for one round of drinks and pictures against the Prague skyline and the setting sun. It was still cloudy, but the rain held off long enough for us to enjoy the view for a while.

From the bar, we walked to the Vltava River where we reconnected with the other half of our group and boarded our dinner boat – Lod’ Pivovar.

We were led down to the lower level, which was blocked off just for us. We were given a choice of beverages, including craft Czech beer and soda. Pro tip of the day, “lemonade” in Europe doesn’t mean what Americans think of – it’s seltzer water and some sort of fruit flavoring. The purple drink pictured is an example of the lemonade I ordered at dinner. For an appetizer, we were given a potato-based soup. While we were waiting for our meal, we were treated to concert of classic Czech music, accompanied by two dancers who performed traditional Czech dances.

The entree was Czech goulash with dumplings, which is quite different from Hungarian goulash. Czech goulash does not contain paprika and reminded me more of meatballs in gravy with sliced bread. The meat was tender, but was fairly bland. I was told by others at my table that there is variation in the flavors in Czech goulash. While other versions may be more flavorful, they are traditionally not spicy.  For dessert, we ended with a homemade berry strudel that I enjoyed. We were also given our daily pin – Rhapsody in Bohemia!

After dinner, we walked back to our hotel a few blocks away. The location of our hotel made it very convenient to explore the city without having to venture too far from “home base.” We finished up the evening at a sky bar near the hotel, chatting with some of our fellow Adventurers. After a long day, we made our way back to the hotel and crashed.

Click here to read about AbD Day 3: Czech It Out!