Our second day at the parks was just my husband and I. We began our day by going to eat brunch with my family.  With so many closures at Hollywood Studios right now, we weren’t worried about getting there first thing. My mom and Ken had heard about a breakfast restaurant off-site that was supposed to be really good (even featured on some Food Network shows), so we decided to meet them there.

While most of the food was good, the service truly left a lot to be desired. Having been a server myself for years, I am generally sympathetic to the idea that someone is just having a bad day.  However, after being told a dish had no peppers in and and then it arriving twice with peppers, I expected the server to at least act like she cared. The manager was nice enough, telling us that most of their meals come with a garnish that includes peppers… which would have been nice for the server to share. The rest of us enjoyed our food, but I honestly won’t be in a hurry to try it again. 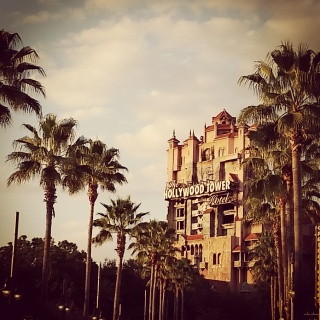 After brunch, Ken and I were still pretty worn out from a full day of driving followed by a full day at Epcot, so we opted to go back to the room for a nap.  I was able to log in to the My Disney Experience app and move our fastpasses to a later time so that we wouldn’t miss anything. We ended up finally heading to Hollywood Studios in the late afternoon.  We rode Tower of Terror and Rock’n’Rollercoaster and just enjoyed the beautiful weather for the evening.  At 7:00, it was time for us to make our way to the Symphony in the Stars: A Galactic Spectacular Dessert Party!  I’ll post a full review of the party soon, but the fireworks were amazing!

Tomorrow, we will meet back up with my family for a day at Magic Kingdom!  I have so many memories with them, especially at Magic Kingdom.  It’s been almost exactly ten years since we’ve been to the parks together so I can’t wait! The last time they were in the parks was when I was a Cast Member in the Disney College Program in Spring 2006!!!