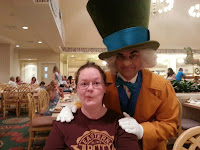 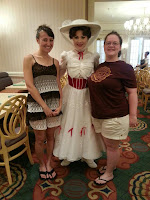 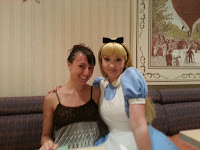 Today was the last day of our trip together. At midnight, it was time to book our cruise excursions. Didn’t get everything we wanted on the days we wanted, but I was able to move things around and get everything. Tina and I then stayed up talking until about 6am… which is why we slept through my alarm at 9:30. I woke up at 10:54am and we had breakfast reservations at 11!

After rushing around like crazy, including packing up to leave, we made it to Grand Floridian about 45 minutes late. They said we might be too late for characters. But we got to see Alice, Mad Hatter, and Mary Poppins. Mary Poppins is Ken’s favorite, so I’ve been wondering about this place-1900 Park Fare. I told Alice that she was Tina’s favorite and she responded “I’m my favorite too!” Which we got a kick out of. 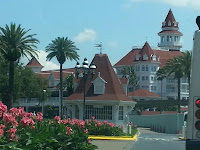 Overall, I liked the breakfast despite not being a “breakfast” person.

After breakfast/pretty much lunch, we walked around the hotel a bit and then used a groupon I found for us to get our nails done. After that, it was time to leave. Tina drove me to the airport, and after a few hiccups, I boarded my flight. We both arrived safely at our destinations.
I had such a great time and I can’t wait to be back down there again in less than 70 days!