I was lucky enough to find my way to the enchanted forest for dinner to the brand new Storybook Dining at Artist Point (opened 12/16/2018) and I can’t wait to tell you about it.

Storybook Dining at Artist Point can be found at Disney’s Wilderness Lodge resort, near the Magic Kingdom. The Lodge is themed to the Pacific Northwest and the forest-based story of Snow White fits well here.

When you arrive, you’re guided into the Enchanted Forest to start. There are lots of “trees” to help feel like you’re in an actual forest. The trees have twinkle lights that change color for different announcements – like they went red when the Evil Queen was coming. Our server (Keith) did a great job of adding to the experience, welcoming us to the forest and sharing a bit about the story and some fun details and facts about the restaurant.

There is a tree-themed lazy susan on the table for the shared appetizers and desserts. Our server said they are still being tweaked and will eventually have twinkle lights on them as well. They also have a hidden Mickey on the trunk of the tree! I won’t spoil the location. 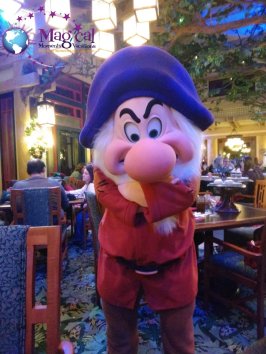 Snow White, Grumpy, and Dopey walk around to the tables. Evil Queen does a theatrical lap and then is stationary in front of a backdrop, similar to Beast at Be Our Guest.

I thought the characters were great. At one point, Grumpy accidentally bumped the corner of our table and turned to glare at the table and I glared right back at him with a grumpy face. The Evil Queen talked about loyalty and the huntsman and asked if I came to marvel at her beauty. When we first arrived, there was a line for the Evil Queen, but we stopped and saw her on the way out with no wait.

The appetizers are shared small plates. Our server said if the format is successful, it’ll be “coming to a restaurant near you.”

Appetizers were Winter Squash Bisque with a marshmallow loli in a tiny iron cauldron, Hunter’s Pie with chicken, and Wicked Shrimp Cocktail.

I thought the apps were cute and well themed, but my husband thought it felt a bit pretentious. The bisque was sweet, which I liked.

The Hunter’s Pie meat was good, but had too much crumbly breading to the amount of meat.

The shrimp was my least favorite, but wasn’t bad. I didn’t get the Thai chili flavor I was expected from the description.

ENTREE
The entrees are selected from a list. We both opted for the prime rib. It came with smoked carrots, horseradish mashed potatoes, and a popover. The prime rib was delicious, juicy, and generously portioned. The smoked carrots were very smoky and I ended up not eating much of them. My husband switched the carrots for brussel sprouts, which he said were good not great. The horseradish potatoes didn’t have an overwhelming amount of hoeseradish, but I was glad I was able to get them without horseradish. We both agreed the potatoes were the star of the plate. The popover was an odd texture I didn’t care for, but I didn’t miss eating the bread with everything else available.

The desserts are also shared small plates. There was Fairy Tale Gooseberry Pie, Forbidden Apple, Miner’s Treasure, and Hunter’s Gift to the Queen. The gooseberry pie was good with predictable flavor. The forbidden apple (white chocolate apple mousse with a sour center) was yummy, but it didn’t taste like apple to me. The Miner’s Treasure looks like Dopey with green cake and berry buttercream with white chocolate jewels – like the “rocks” on some of the Star Wars cupcakes a while back. After the main desserts, our server brought a mysterious silver box with billowing smoke, filled with maple popcorn and a ganache heart. I was happy with all of the desserts and I liked the mix of sweet, sour, and crunchy from the different options.

I ordered a drink called the Smoking Mirror. It’s Johnny Walker Black, Wildberry, Lime, and Rosemary Smoke. The smoke flavor overwhelmed a lot of the drink flavors, but it’s beautiful for pictures. My husband ordered the Bushel of Peaches which would have benefitted greatly from a stirrer. Instead it tasted like straight bourbon at the top and then we found the peach flavor in the pure muddled peaches on the bottom. Probably is a good drink if you mix it.

Our experience was really enjoyable. I saw some other tables getting frustrated with timing, but I thought the pace was reasonable for a character dining experience (e.g. a family left to discipline their kids, came back to their appetizers just in time for the entrees to come out and were upset about it). I think there were a few legitimate kinks, like the long line for the Evil Queen, that will be worked out over the next few weeks. I was really thrilled with the theming and attention to story details. I see this becoming a must do.