Skip to content
November 13, 2016November 17, 2017 MMVwithMiranda
To get caught up on our trip so far, Amsterdam was awesome (Day 1, Day 2) and our first day in Paris was… a learning experience.  Determined to see some of the world famous attractions Paris has to offer, we had a quick room-service breakfast of fruit and baguettes and got ready.  I grabbed our passport to lock in the safe and we set off on our site seeing expedition!

We were able to catch a bus about a block from our hotel straight to the Arc de Triomphe. One thing I didn’t realize before we arrived – the arch is in the middle of a busy roundabout so you have to go through tunnels to get to the actual monument. It was a little confusing (to me at least), but there were signs pointing you where to go. There is an elevator to the top of the arch that I’ve been told provides an amazing view of the city skyline, complete with the Eiffel Tower. However, the lift was broken and we didn’t want to spend all of our energy climbing the stairs so we admired from the ground.

The arch was originally commissioned by Napoleon as a celebration of the French army and their victories. The intricate carvings depict battle scenes, delicate details, and list the names of the battles and army officials who participated in them. I stood under the arch, awestruck, when I noticed carvings in the ground and an eternal flame. I used my limited French skills to ascertain this was the French equivalent of the Tomb of the Unknown Soldier. Even though the arch is situated in the middle of a busy intersection, there was a reverent silence as people stood to pay their respects to the fallen. 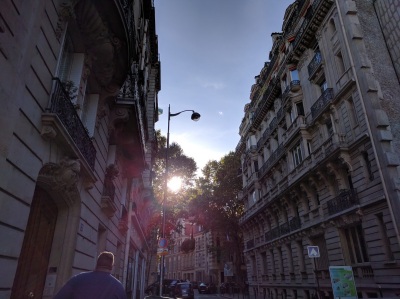 We spent about an hour admiring the Arc de Triomphe before heading toward the Eiffel Tower. The bus dropped us off a few blocks from the tower, which gave us the opportunity to have lunch at a small sidewalk cafe, Les Deux Abeilles (The Two Bees). The clear sky and mild temperature were perfect for sitting outside. After my meal the night before, I decided to go vegetarian for lunch – cheese ravioli. My husband had avocado-stuffed chicken. We both felt our meals were decent, but nothing to write home about, as they say. However, it was definitely edible, filling, and exactly what I expected it to be, which is more than I could have said about the previous meal.

Side note: when ordering, be very clear. My husband was debating two things and mentioned to me that he decided he did not want the [item he didn’t want]. I guess the server misunderstand because a few minutes later, said item arrived at the table.

The restaurant was closer to the tower than I had realized. We walked to the end of the street, turned, and there it was, peeking around the building.  The tower is situated in a park/garden full of trees and sprawling lawn scattered with family picnics and young couples. As we got closer to the tower, I realized the magnitude of how large it is! I feel like the pictures just don’t adequately prepare for the reality of standing at the foot of the Eiffel Tower, looming one thousand feet above you. I struggled to get the whole tower in pictures and kept having to step back further to be able to capture what I was seeing.  A perk of visiting in the fall was getting to see the iconic tower beautifully framed by the turning autumn leaves. Words cannot accurately describe how it felt standing before one of the most recognizable landmarks in the world.

We approached the foot of the tower where we went through security fairly quickly. Each foot of the tower has its own ticketing area. When we visited, at least one of the legs was only for people who wanted to take the stairs so be aware of the line you’re in before you wait for something you didn’t want. At the North (Nord) pillar, we were able to purchase tickets to ride the elevator either to the second (2ème/deuxième) or top (sommet) levels. I had read that going to the second floor provided a great view and that going to the top was unnecessary, but I had to try for myself. For a difference of €11 versus €17, we decided to go all the way to the top – when in Rome… or Paris as the case may be.


To get to the top level, you first ride the elevator to the second floor.  On the way up, you skip the first floor and head about 300 feet up to the second floor. The elevator had glass walls so you could clearly see how high up you were going, which was enough to make my stomach queasy. On this level, there were gift shops, snack and drink options, and restrooms. The view from here was spectacular, especially the sun setting over the Seine River.

We spent a good amount of time on the second floor – both enjoying the view and working up the nerve to continue our ascension to the very top. I decided to bribe myself with macaroons that I was only allowed to have when we were at the top.  We finally found the courage and climbed aboard the elevator to the third floor. While the first set of elevators go up one of the legs of the tower, the second lift goes straight up the middle. I had no qualms about spending the entire ride up with my eyes tightly shut as we rose an additional ~600 feet to reach the top of the tower. 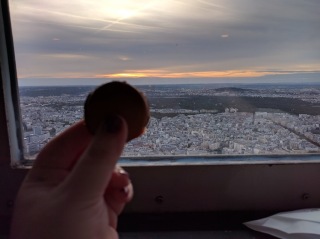 The view at the top took my breath away in more ways than one – not only was the view stunning, but seeing how high up we were literally made me short of breath.  On the second level, you were able to make out various landmarks. At the top, it was difficult to find distinct buildings as everything was so small. 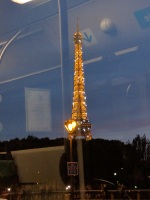 Above the glassed in area, there was an open air viewing platform. It was crowded in the glassed in room so I started up the stairs to get some fresh air. I took one step off the stairs and felt the nerves setting in – my breath shortened and my toes actually curled in a natural reflex, trying to hold on to ground. I decided that I did not need fresh air anymore. My salted caramel macaroon was melt-in-your-mouth deliciousness, but I think I would agree with those that say to save your money and just plan to go to the second floor. As we were riding the bus back to our hotel on Montmartre, the Eiffel Tower lit up and sparkled in the evening sky.

Across the street from our hotel was a small pizza place, Piazzitalia. I decided to try escargot as my appetizer. The flavor was good, very buttery and garlicky – but the texture was not my favorite. I generally don’t prefer most seafood because of the texture and this fell in that same category. It was an interesting experience and I would recommend trying it while you’re in Paris.  The pizza took a little while to come out, but it was delicious… so delicious I forgot to take pictures until we were almost done and no one wants to see half eaten pizza! Before we tucked in for the night, we walked down the street and got a couple crepes from a street vendor. Bonus tip: coco means coconut and chocolate means Nutella.

There is definitely magic to be found in Paris!
Miranda